Prior to troubleshooting these Kinze Grain Cart Models....review this article for the most complete knowledge about known scale issues.
The Kinze series Grain Carts are notorious for being in-accurate by as much as 4-5% or more, as well as changing weights from one location at rest, to the next location at rest (when moving from POINT A to POINT B, the weight varies significantly in each "stopped and level" location).    Some of the time the problems are discovered and remedied by the standard troubleshooting process.  However, if after troubleshooting the scale and not having success in finding the problem, follow the procedures below to identify and remedy the issue.

1.      Make sure both compression cells are straight up and down (vertical).

If the load cells are not straight up and down correct this issue by adjusting the top bracket.  Retest troubleshooting.
Below is a picture of a compression type load cell installed.  This is located just above the rear horizontal pin on the grain cart. 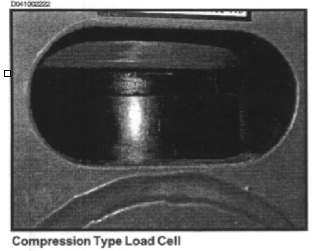 2.     Check to make sure that there is weight on both of the rear compression cells, with the auger in the extended and retracted position.

We have experienced conditions to where the hopper frame flexes enough to remove pressure on the right rear load cell when the auger is extended.
- If a load cell does not appear to have pressure or a load on it, a shim needs to be added above the cell.

NOTE:  Typically one shim above the load cell fixes the issue, however, sometimes you have to put the matching shim in the opposite side of the cart to allow the frames to adjust properly.
Model 1050 shim is p/n:GD21198,
Models 900-1500 shim is p/n:GD23996.

Check for Binding on the Horizontal Retaining Pins

3.     Check the two hopper rear horizontal retaining pin (tear drop shaped pin in the referenced picture below on left and right side of hopper)
A. Looking underneath of the hopper, and the inside edge of the horizontal pin, there is a bolt that threads into the pin, there are usually several washers between the bolt head and the frame.  These washers must be loose enough where you can turn them by hand.
If the washers are tight, remove one and recheck the scale for accuracy.
B. If the washers are already loose, or after removing a washer to make it loose, and it doesn't remedy the problem....
- Looking on the outside of the frame, again at the horizontal pin, at the top of the tear drop shape, just above the grease point, locate the bolt retaining the horizontal pin.   The purpose of this bolt is to retain the horizontal pin from "spinning."
- Remove the bolt and observe the small bushing, if the bushing is "out of round" or bent, remove the bushing completely, and replace the bolt.  You should be able to turn the horizontal pin freely front to rear, and the bolt should retain it from turning completely 360 degrees.

Put Loc-Tite on the thread of the bolt prior to replacing the bolt without the bushing.  (blue type of Loc-Tite recommended)
If the horizontal retaining pin is still binding and the above procedure's do not remedy the problem or you are unable to get the horizontal pin to rotate freely...
A.  remove the horizontal pin completely, clean the grease from the pin and inspect the pin to find the location where it may be binding.  It may be observed that there is no damage to the pin and dirt or debris was the cause of the binding issue.
B.  As a last resort, and prior to doing so you may need to grind down the surface of the pin where evidence of binding is occurring.   Prior to do this please contact Scale-Tec as this is not the recommended procedure and should only be considered as a last resort. 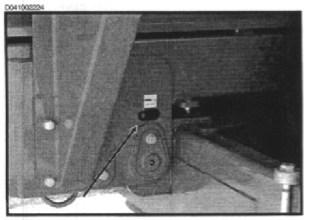